What are some distinctive features of a Knowledge Garden, as being developed by TopicQuests? 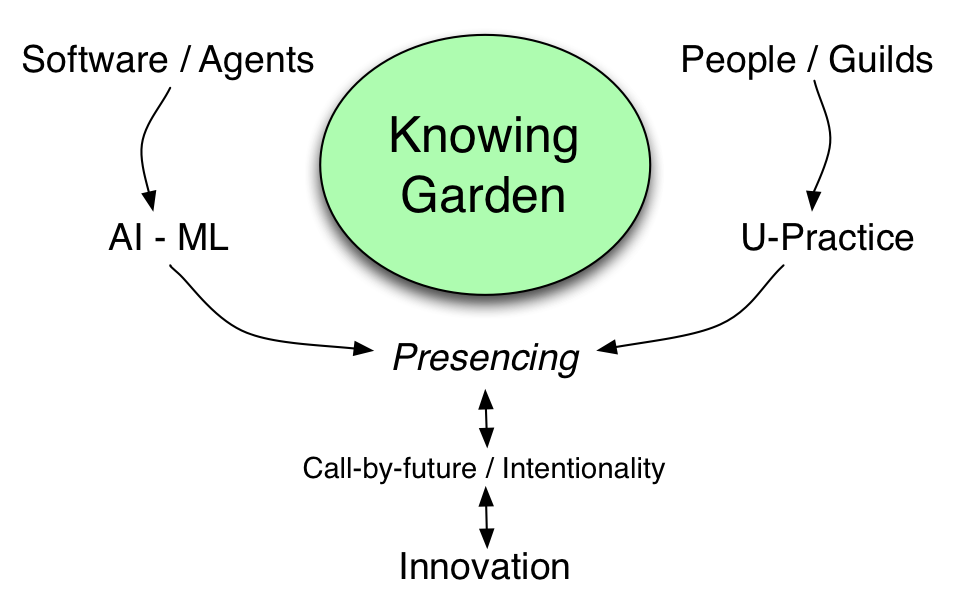 Knowledge Garden evolves the concept of Dynamic Knowledge Repository (DKR) that was presented by Douglas Engelbart and his Augment project, along the following axes:

In this case we refer to the Garden as a Knowing Garden, to highlight it as an active process to acquire knowledge, and to create new perspectives and organs of perception – information displays, control rooms and situational awareness – relevant to the Garden’s topics.

A Garden’s development and growth, and the behaviour of its autonomous agencies, is guided by its Guild (or Guilds). The Guild, and Guild Members, provide the lens through which perception and consequent decision-making takes place, and so that lens must be clarified and calibrated. An enhanced cognitive exoskeleton will only amplify the destructive results of unexamined minds inhabiting it. Ultimately, navigation starts with the inner state of the practitioner. Guildcraft thus explicitly makes use of social technologies for leadership and innovation, such as Theory U or Art of Hosting, among others. In the diagram above this is referred to as U-Practice. It follows a pattern:

To this we add a fourth element:

It is the Guild’s cultivated intentions that must provide guidance, intentional and ethical, for the autonomous agencies with which it is creating a knowing ecosystem. These intentions guide the development and configuration of software systems, so they they act in the right directions and do not run amuck. At the same time, Machine Learning (ML) systems using the Guild as a training target can more likely embody wisdom if the Guild itself has an explicit wisdom practice. For issues that are complex, wicked, and inseparable from human subjectivity (i.e., anthropogenic) this is essential.

The intersection of the cultivated human and machine systems in the Knowing Garden could be described as a symbiosis oriented around the caring intentionality of the Guild. There is a mutual interpenetration here. Human intentions guide the development of software-enhanced perceptual systems, through which the humans then develop new perceptions. In the diagram, Presencing is the Theory U term which characterizes the clarified fulcrum state between the past state and possible future state. One way of implementing this is to couple software constructs called futures with guild intentionality: human intentionality is software’s call-by-future. The outcome is innovation: openings into and prototyping of adjacent possibles.

Over fifty years ago Douglas Engelbart described a DKR,…

Here's one phrasing of a Mission Statement for…