Over fifty years ago Douglas Engelbart described a DKR, Dynamic Knowledge Repository, the intention of which is to augment the capacity of human beings to collaboratively deal with complex problems, as having two aspects: the Tool System and the Human System. We extend that to include the Earth/Life System that supports and is affected by Tool and Human systems. 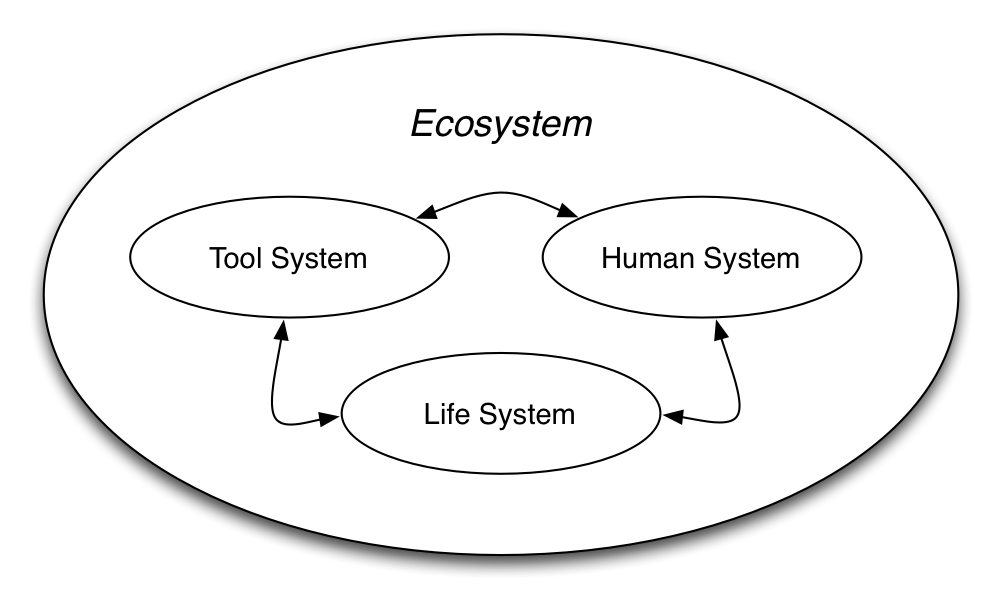 The Tool System consists of hardware and software that enables networked sensing and display, for collaboratively storing, interacting with, and organizing knowledge. Elements of the Tool System as pioneered by the Engelbart initiative (including graphical screens, mouse pointing and keyboard chording, networking, and others, as spectacularly demonstrated in the December 1968 MOAD) have gone mainstream and are now a pervasive part of our computing environment. However, there has actually been very little work done on the Human System: when one goes to the Human System page on the Doug Engelbart web site, what one sees is “Coming soon…“.

It is also important to not just consider the Human System from the point of view of how it needs to adapt, via UI, UX, gamification, or other means, to the Tool System. Human groups and societies themselves form a CAAS: a Complex Adaptive Anticipatory System, and as such they need to augment their own capacities for becoming aware of individual and group emoto-cognitive biases and framings, for seeing the environment from which they emerge in interdependence, and for responding to what current and future situations are requiring. There are now social technologies (for example, Theory U) that have built on the world heritage of wisdom traditions dealing with individual awareness, emotion, and sanity, extending those to how groups become aware of themselves, how they co-sense key issues, and of how they prototype and actualize responsiveness to emerging futures.

The positive effect of the Tool System is to provide us with access to each other, to vastly more data, and to consolidated knowledge. However, it turns out that there are negative effects, due not so much to technology itself as to how technology is driven by Human System business models. Social tooling systems, such as Facebook and YouTube, optimize for monetization of short-term and fragmented attention. This has the result of deteriorating the human resting state of attention that is the basis of sanity and of the capacity to perceive reality (what we call truth). Our Tool System in many ways directly attacks the knowing and leadership capacities of the Human System, consequently undermining human institutions such as electoral democracy and further increasing the dangers of a blindly amplifying Tool System. It is not an exaggeration to say that via the Tool System we are conducting real-time un-controlled experiments on the minds and emotions of billions of people, with unknowable consequences.

Together, the Tool and Human Systems make up a Complex Adaptive System, but we must add a third element: the Earth/Life system which sustains humans and their tools. This includes the geosphere, aqua-sphere, atmosphere, and biosphere, not to mention other essential elements such as magnetosphere and ozone layer. We’ll call this complex totality the Life System. As Freeman Dyson has noted, it is vegetation that drives the atmosphere. Together, Life, Human and Tool systems make up the Eco System: that is our CAAS in its totality. Accordingly, we must update the Engelbartian perspective to include three systems: Life, Human, and Tool. In addition, there are bi-directional relationships between each of those systems, giving us a total of nine elements (3 systems and 6 relationships).

The Tool System, particularly through increasingly “intelligent” software agencies, is becoming ever more autonomous in its actions. This means that guidance cannot simply be provided as needed by human beings, but must be built into the software itself. This dovetails interestingly with what is said of leadership in Theory U, that it is not so much a capacity of an individual as of the system itself. Here we find that systemic leadership must become a self-aware capacity of not just the Human System, but also of the Tool System, and so ultimately of the symbiosis of Human, Tool, and Life systems. To the extent that the roots of human sentience (awareness + care) are found in the Life System, that latter too must be seen as participating in the leadership of the totality of the Eco System. This expands the scope of what in Theory U is described as the journey from ego system to eco system, and also the scope of an Engelbartian augmentation of our capacity for thrival in complexity.

What are some distinctive features of a Knowledge Garden, as…